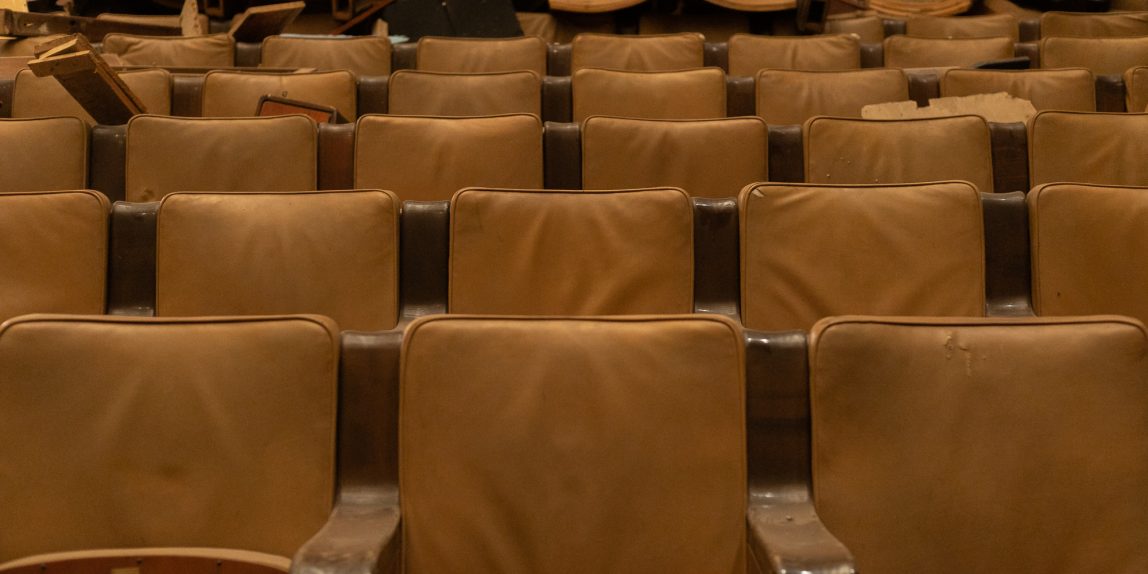 In 2022, several foreigners who participated in the Urban Exploration Tour organized by Reptilianul had the chance to visit the Omnia Hall in Bucharest, an important cultural objective due to the history it had, but especially the course it will take. This place, which hosted the meetings of the Central Committee of the Romanian Communist Party, the Romanian Senate and, later, the “Ion Dacian” National Operetta Theatre, is now under the administration of the Bucharest National Dance Center, which intends to transform the Omnia Hall into a dance house.

“The Omnia Hall has been an important part of Romania’s history and its unique architectural design stands out with its expansive skylights. While there is beauty in the abandoned nature of its current state, the building has so much potential. I hope the building can be transformed to allow more people to visit to it remember Romania’s history and dream of a its future.” – Kenny Khoo

“We were lucky to visit Omnia Hall before the renovations, and truly experience the old soul of the building. All the way through the building you can observe the glamorous architectural design and put your mind into the perspective of the events that happened there. It’s fantastic that the hall will be given new life as the National House of Dance as this building is truly a hidden gem in Bucharest. For us it’s wonderful to know that the building will have a new purpose once again, and we can only envy the dancers who now have a place to practice and perform in such a historical place.” – Daniel Rosenlund & Asbjørn Emil Hansen

“On a Sunday morning in October, I met with Alex on Revolution Square to explore a forgotten building from the communist era: the Omnia Hall. When entering the building we were greeted by street art of Ceausescu telling us that “everything would be great” and somehow this time he wasn’t wrong as inside we found scenery of beautiful decay.

After going through the stripped and deserted entrance hall we entered the big abandoned conference hall. The hall appeared to not have been used since the fall of communism and as such being there felt as if you had gone back in time. The rows of remaining vantage brown leather seats and the lighting of the big hall gave the whole area a very apocalyptic but serene movie-like appearance. Especially attractive to the conference hall is its roof that lets through natural light via a wonderful pattern that clearly was inspired by the geometrical designs of the Romanian artist Brâncuși.

Walking around in the different parts of the declining building really felt like a small adventure. In each room there was something interesting to find. For instance, we found a logbook regarding renovations which apparently stopped in the early 2000’s. This raises the question how much longer this building will remain in its stuck-in-time state as it is to be transformed into the House of Dance at some point in the future. However, at this time, unsurprisingly, it doesn’t seem like the those in administrative power are in a hurry to make the transformation happen.

So, for now the Omnia Hall remains a place where you still can get an authentic glimpse of the communist Bucharest that has passed, but don’t wait too long to visit it yourself.” – Steven Brouwer

“The states we experienced inside Omnia hall were complex and multi faceted. Our first impression was that of a huge imposing structure, obscured by surrounding plant life and so out of place in an otherwise vibrant street. The brightly coloured portrait plastered above the door was in stark contrast to the vibe of the place, foreshadowing its potential future. Upon entering Omnia hall we were floored. The wide open space was sparsely populated and seemed a time capsule. Varying degrees of awe and mourning were experienced throughout its entirety, with an ever present feeling of exploration. The building is magnificent, and any future transformation into a national house of dance is inspiring. The structure is truly unique and any chance of it being saved and repurposed for good is incredible. All I can hope is that they preserve some of the awe inspiring charm it has today.” – Aiden Attwell

Support our independent journalism platform with a donation: